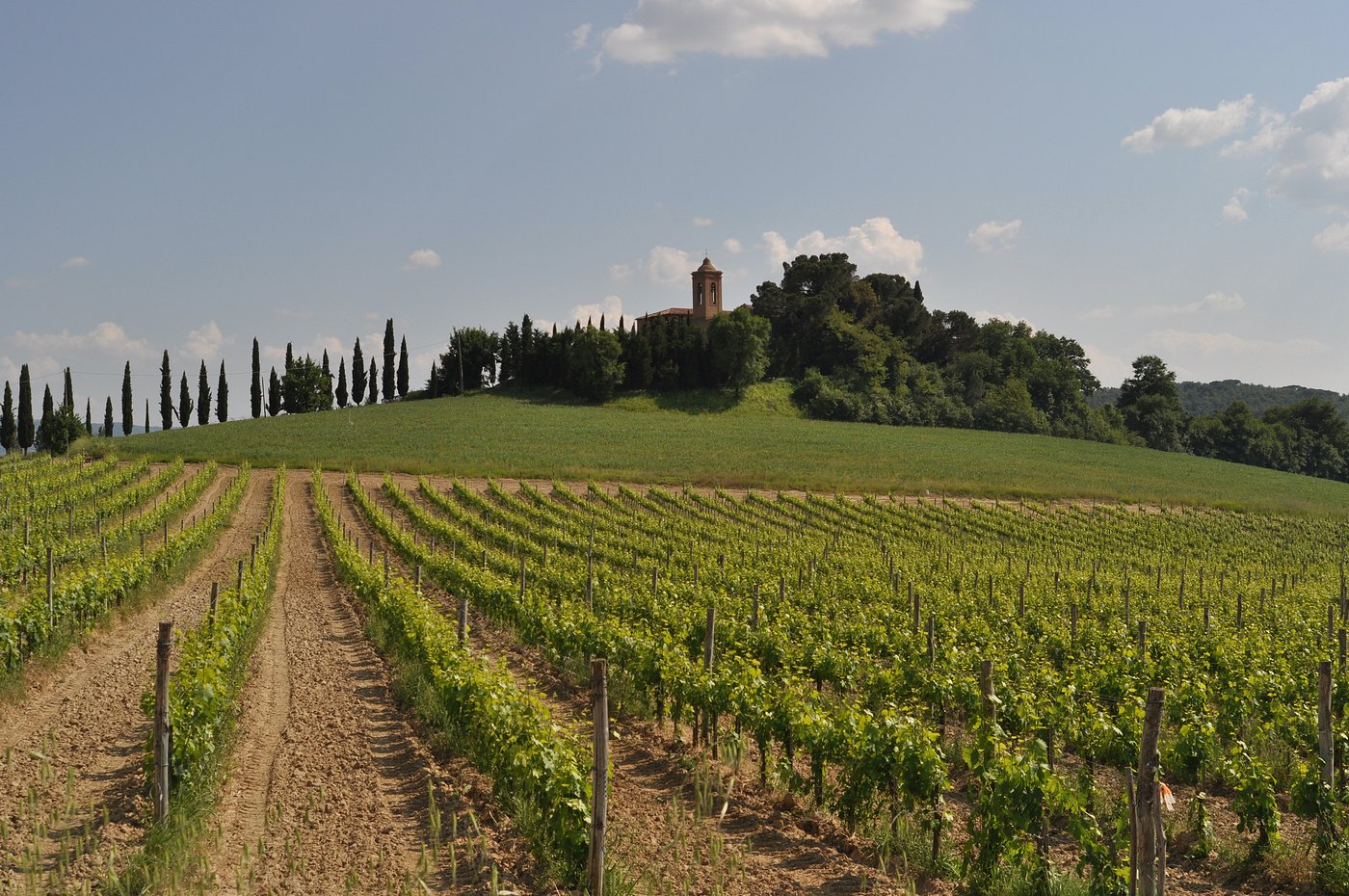 A MTB adventure from Poggibonsi to Montepulciano

No other region of Italy conjures up such classic Italian images … the hamlets and hilltop towns, terracotta rooftops, swaying cypress and golden valleys. The roads both paved and dirt are pretty much surrounded by silence, yes … ok … there are hills to climb … but your efforts will be well rewarded by the simply perfect views,the scenery in every season and with any weather seems to be a work of art.

In each of the towns you will stay, the locals gather, just like in old times, in the piazza every afternoon for a walk in their “corso”(old town’s main road) looking for a stroll with friends or a good “espresso.” This simple way of life is the Italy’s best kept secret.

Sport and culture can be found on the same roads here and are suited for cycle tourists who love to ride in the shadow of ancient civilizations. Here travelling requires frequent stops in order to take it all in, there are towns and villages that will take your breath away. After a ride through rolling green wheat fields, vineyards, zig-zaging through lines of cypress, you will taste the true flavours of this land… pecorino cheese, fruity olive oils, the famous Tuscan wines, and the warmth of our hospitality each evening.

Arrival at the hotel in the vicinity of Poggibonsi (si), meet the guide that will introduce you to the tour and bike fit in case you are renting a bike

Moderate, Rolling hills, from the San Lucchese inn we will take the Via Francigena bike trail for 4 km then we will take a gravel road heading uphill, from there there will be a sequence of short hills to climb until the final on to San Gimignano (16k) from there there will be a 20 km loop across the forested Poggio del Comune hilltop initially descending for 2 km then taking a 6km climb that will take us to the summit area where we will have some short up-and-down sections for 4 km then descend down to San Gimignano from the North West. From San Gimignano we will then return using some gravel roads and few asphalt sections to the hotel area

Moderate level, gently rolling terrain, we will initially take the Via Francigena bike way to get to the nearby town of Colle di Val d’Elsa (8k) then we will continue in the rolling  countryside close to Monteriggioni until Strove (16k) where we will start crossing the forested Montagnola Senese  using a mix of gravel roads and dirt roads a pretty vast mountainous territory West of Siena with mixed wood of evergreen oaks and chestnuts for roughly 15 km then we will get to the outskirts of Siena and climb to the walled city where our hotel is.

No technical sections, moderate level, We will exit the town using the ancient way of the pilgrims, the Via Francigena, a good part of the ride will be coasting the many durum wheat fields and small oak woods as we get closer to the village of Radi (17.2k) entering the territory of Murlo , now a forested area, famous for its Etruscan heritage and its former mining activity, we will climb its hills and descend crossing the river Ombrone (36.5k) and starting the climb to the Montalcino hill, initially not so steep then with some steep section in the last 8k.

No technical sections however there will be some steep but not long inclines, moderate level, mostly on gravel roads. From the town we will descend from the Northern gate downhill on gravel roads crossing the famous wine making estates (2km) then we will take an undulating gravel road that will take us to Torrenieri (9k) from where we will use a bit of Cassia road to climb then, after 2 km we will turn left taking a wide gravel road of 10 k offering us stunning views of the Orcia Valley (UNESCO heritage), then a dirt road that merges on a gravel road and for the final 2 km of asphalt  will take us to Montefollonico (32km); a nice stone and brick  old hilltop village facing the imposing medieval town of Montepulciano that stands on the tufa crag on the opposite side of the valley or if you like other 7km away on our way… 3 of descent and 4 of ascent.

Great ride, no technical sections however there are some steep sections, moderate level, mostly on gravel roads. From Montepulciano we will initially move East on a minor road that soon becomes gravel, the presence of the vines as “classic” Montepulciano vista is present in the very first 6 km, gradually climbing then using some gravel roads we will reach a pass dominated by a Medieval Castle that will make us descend in the Orcia river valley with a 7 k descent. We will have 10 k mostly flat in the valley partly coasting fields partly the dry wide river’s bed, then we will take a gravel road that in 7k will take up in the hilltop where the town of Pienza sits(33k). To get back to Montepulciano you will have 2 options, staying on the asphalt road (14k) with gently rolling terrain or using our selection of dirt roads and gravels on a more undulating terrain that will take you to destination in 16k. 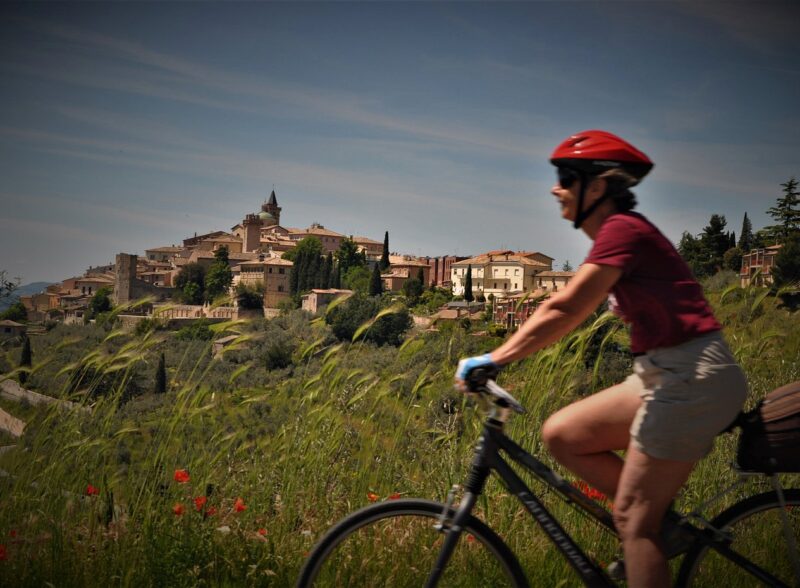 The Best of Tuscany and Umbria 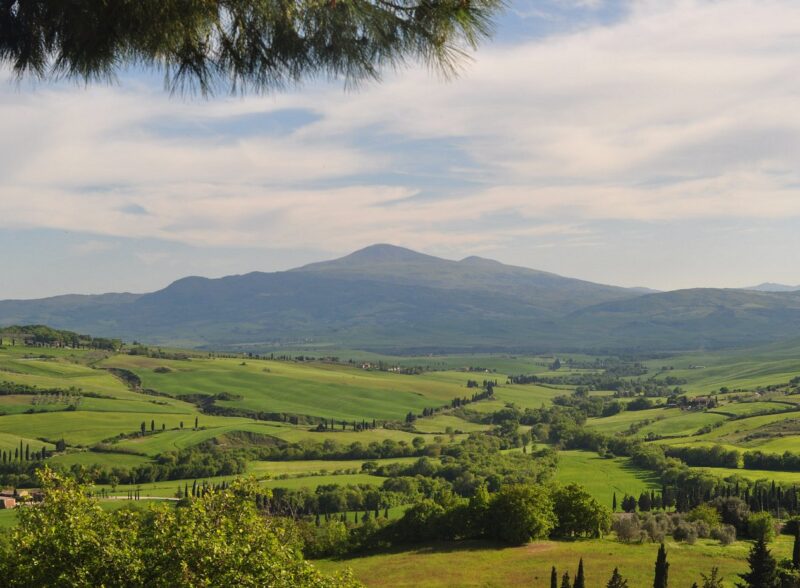 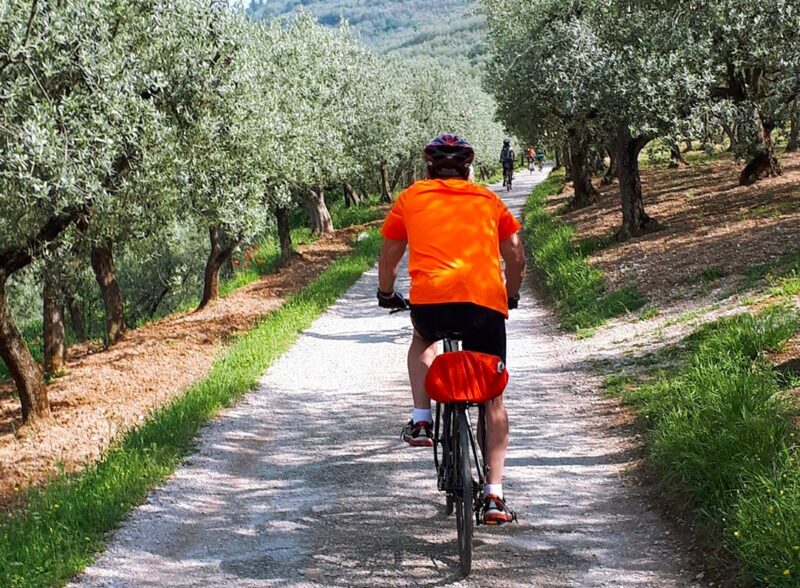 Bicycle ride in the Heart of Umbria 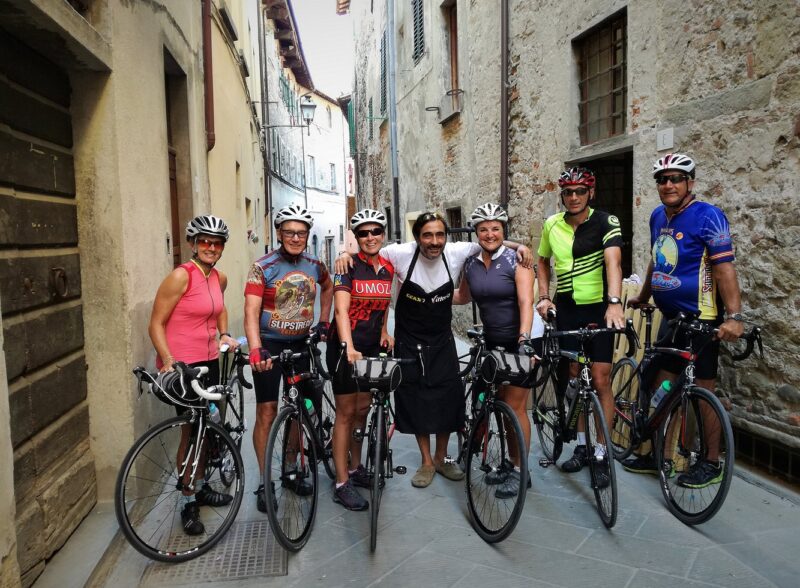